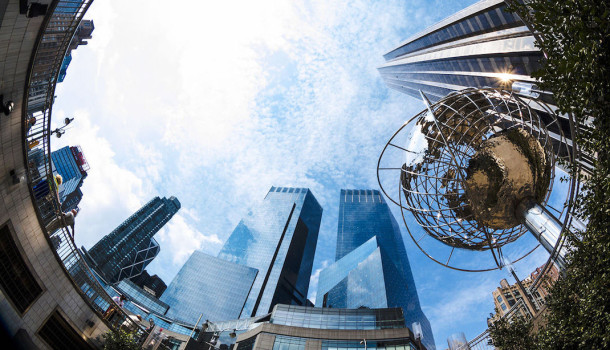 From big data to the gig economy to social selling to generation Z, these buzzwords are starting to have real, mainstream impact.

Depending on the sort of entrepreneur, employee, freelancer, or company leader you might be, the year ahead holds varying degrees of promise and pitfalls. Some of the changes afoot are already affecting some more than others.

But optimism is itself a strategic asset—as long as it’s backed up by a strong grasp of the facts. With that in mind, here’s a look at some of the business trends that seem most likely to impact professionals of all stripes in the years ahead.

Infographic made with Visme.

Increasing numbers of skilled professionals are driving the growth of the gig economy. And while there are those who ultimately expect that growth to level off, it doesn’t appear ready to do that within the next few years. A 2015 Freelancers Union survey of over 1,000 American workers found that 34% had done freelance work over the past year, and about 60% of those who had received 25% or more of their income from those jobs.

THE BARRIERS TO ACQUIRING AND SUSTAINING FREELANCE PROJECTS CONTINUE TO DROP.

That may not sound like much, but it hints at considerable and growing potential as the barriers to acquiring and sustaining freelance projects continue to drop. Fueled by cheaper cloud computing, remote work tools, and the spread of enterprise-level technology platforms for independent workers, the gigging trend will continue to grow.

That’s good news for established companies, which can tap into the talent they need for the time they require it. Savvy businesses can become more efficient, reducing fixed costs and improving their bottom lines.

2. BIG DATA GETS EVEN BIGGER

Admittedly, “gig economy” and “big data” are two phrases that are about as buzzy as you can find in the modern business world. But that’s no reason to dismiss either one. Both consumer (B2C) and business-facing (B2B) companies are facing intensifying competition when it comes to customer insights, and the data-science field is expanding in order to help meet the challenge. Not all data analysis qualifies as “big data,” of course, but solutions are multiplying, and 2016 may well be the year that more companies seriously ramp up their investments in the field instead of just talking about it.

BIG DATA SPENDING IS PROJECTED TO GROW BY A CAGR OF 23% EACH YEAR UNTIL 2019.

According to Forbes, only 15% of Fortune 500 companies are currently using big data analytics—and indeed, big data isn’t appropriate to many small and mid-size companies—but one trade group reports that businesses are pouring considerable resources into it: Big data spending is projected to grow by a CAGR of 23% each year until 2019.

The ability to develop an integrated, analytical view of customer activities and business operations will separate the wheat from the chaff more decisively and rapidly than we’ve seen so far.

Every business needs to get their message out there. Original content creation is poised to overtake content curation. With LinkedIn, Facebook, Twitter, and other social platforms making major moves to enable social selling with original brand content, businesses will have to deepen and expand their messages in order influence the masses.

Here are some survey findings one social selling company recently assembled on activity in the sector:

These trends will continue to grow. Thought leadership content—from blog posts to videos—that create a sense of authenticity and excitement among consumers will only become more crucial. Businesses with the most compelling, original voices will rise above the noise.

It can take a while to get that right. And as users’ activities continue to shift and evolve on social platforms, it also takes patient experimentation. That’s all the more reason for businesses to double down sooner rather than later on cultivating those personal, social media–driven relationships with their customers.

2016 is shaping up to be a bad year for so-called unicorns as well as for other startups that have gorged on the recent investment bubble. Despite the outlier successes of Airbnb, Dropbox, and Square, it’s clear that the tech IPO market is slowing down.

NOT ALL ENTREPRENEURS HAVE BEEN GREEDILY CHASING INVESTMENT DOLLARS.

Valuations are falling, financing is getting more competitive, and plenty of money-losing startups are cutting costs. But not all entrepreneurs have been greedily chasing investment dollars, and many have been building lean businesses, creating meaningful products, and growing organically. We’re likely to see a vindication of sorts for “lean startup” practices. For the heads of those businesses, anyway, there’s still tremendous opportunity to build sustainable ventures.

The fixation on millennials—how they supposedly do and don’t work, what they supposedly do and don’t want from their careers—is overblown. Why? Because that conversation lacks focus. The oldest millennials are now turning 35—they’re hardly the new kids on the block anymore. And they share little (in terms of experience, working styles, and priorities) with Generation Z, the youngest demographic of new workers now entering the workforce. Gen-Z roughly encompasses today’s teens and young adults born after 1995, the oldest of whom are 21 years old—next year’s entry-level employees.

As one observer writes, summing up recent research, “These are kids who grew up in a post-9/11 world, during a recession, and during a time in which 1 in 4 American children lived in poverty.” All that will have a major impact on Gen-Zers’ prospects and approach to realizing them.

A recent Northeastern University study on Gen Z concludes that the generation is “entrepreneurial [and] wants to chart its own future,” and goes on to point out that:

Some of this trepidation is well-justified, in light of issues like the student debt crisis and college affordability. But many of Gen-Zers’ traits seem likely to propel them toward innovation and growth hacking in a wide range of current and emerging industries.

The fact is that for independent workers, tomorrow’s entry-level employees, entrepreneurs, growing startups, and establish corporations, sustainable growth and innovation are never one-time things. It takes a deep emotional, systemic, and cultural stake in the changing climate—which starts, of course, with an understanding of it.

How To Weather 3 Critical Business Crises: Personnel, Systemic, And Contextual

Why Design Thinking Is Critical For A Digital Future