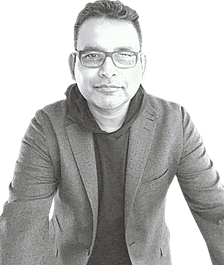 Faisal Hoque is an accomplished entrepreneur, senior executive, author, thought leader, public speaker, and advisor to management teams and BODs with more than 25 years of cross-industry success. He is the founder of SHADOKA, NextChapter, and other companies. Shadoka’s products and solutions bring together the management frameworks and digital platforms to enable innovation, transformation, entrepreneurship, growth and social impact. NextChapter is a multidisciplinary collaborative research organization focused on sustainable and transformational changes. He also serves as a strategic partner and a thought leader for CACI, and works extensively with US Federal Agencies. CACI is a $5.7 billion public company who plays a vital role in US national security.

He has authored several books, including Everything Connects – How to Transform and Lead in the Age of Creativity, Innovation and Sustainability and Survive to Thrive – 27 Practices of Resilient Entrepreneurs, Innovators, And Leaders.
​
Throughout his career, he has developed over 20 commercial business and technology platforms and worked with private and public sector global brands such as GE, MasterCard, American Express, Northrop Grumman, PepsiCo, IBM, Home Depot, Netscape, Infosys, French Social Security Services, Gartner, Cambridge Technology Partners, JP Morgan Chase, CSC, US DoD, and others. What sets Faisal apart is the unique position and perspective he has always maintained, which is grounded in a hardcore technology with deep roots in leading-edge management science.

Here is his personal story on his blog – “Corridors of Carbondale”.

“Faisal Hoque, the entrepreneur, innovator, was born in Bangladesh and found himself in the boardrooms of Fortune 100s by the time he was 27.” – Dr. Marshall Goldsmith, #1 Leadership Thinker in the World (Thinker’s 50/HBR)

“Talk about a trip: entrepreneur Faisal Hoque started his career in the U.S. as a “janitorial engineer,” but eventually went on to raise $10s of millions for his businesses, despite setbacks like being ousted as CEO of his own company (sound familiar, Apple?).” – Fast Company

At the age of only 14, he began what would be the first of many businesses; cobbling together stereo components to sell from his father’s home in Dhaka, Bangladesh in order to save the money he would need to support his plan to study in the United States.

He built his first commercial software product at the age of 19 while studying at the University of Minnesota, and went on to hold management positions in Pitney Bowes and then Dun and Bradstreet. In 1991, Pitney Bowes recruited him to join one of their R&D groups before he finished his undergraduate degree.  At Pitney and Dun and Bradstreet, he worked on cutting-edge analytics and decision support methods and systems for customer intelligence, sales effectiveness, and revenue optimization before CRM/ERP, Sales Automation, and Business Intelligence were hardly concepts.

In 1994, GE recruited him, then one of its youngest technology executives, to launch one of the industry’s first comprehensive B2B electronic commerce spin-offs, leveraging his innovation from one of his startups.

As a thought leader, he has written several books on management, innovation, leadership, creativity, and entrepreneurship; established a research think tank in collaboration with leading academics from around the globe.  He has become an authority on entrepreneurship, mindful leadership, innovation, creativity, transformation, and sustainable growth. His research leadership created several financial indices and methods such as the Convergence Index, Business Agility Index, Sustained Innovation Index, and Operational Excellence Index that measure the correlation between management maturity improvement and organizational financial performance. For his commitment to business-technology convergence, CIO Quarterly magazine designated him “Mr. Convergence”.

His book, The Power of Convergence (published by the American Management Association [AMA]), was released in April 2011 and almost immediately was named “One of the Best Business Books of 2011” by 800CEOREAD and CIO Insight. Two of his previous books, Sustained Innovation and Winning the 3-Legged Race, were also included in the “Top 5 Transformation Books” of the last few years, while Sustained Innovation also ranked in CIO Insight magazine’s “Editor’s Picks: The 10 Best Business Books of 2007”.

A lifetime student of Eastern philosophies, he holds a strong belief that it is through knowledge sharing of our experiences that we may provide the greatest clarity on how to improve our collective future. His blog got named as one of The Best Entrepreneurship Blogs for 2017 (ranked #1) – “Entrepreneur Faisal Hoque’s blog is packed with great tips for aspiring small business owners, but his psychological tips for staying strong under pressure and in the face of failure are a real standout.”