A Lesson In Overcoming Adversity Through Innovation 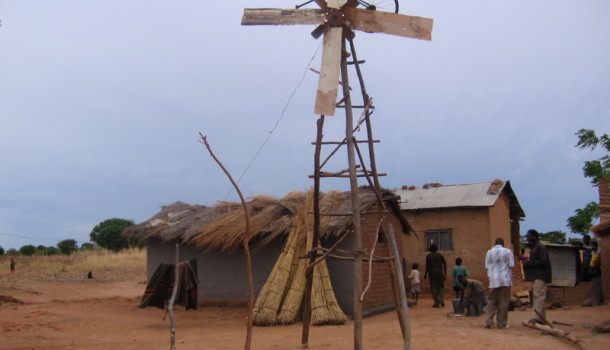 A boy from Malawi teaches us how to tackle socio-economic issues with innovation.

William Kamkwamba is from Wimbe, a small rural village in Malawi, Africa. In late 2001, while his family was battling life-threatening famine, then 14-year-old Kamkwamba was forced to drop out of high school because his family could no longer afford his school’s fees. Rather than accept this fate, he educated himself by borrowing books from a small community library.

Inspired by diagrams and pictures of windmill designs he saw in these books, Kamkwamba decided to build two machines: The first provided electricity to power his family’s home. The second provided a constant supply of drinking and irrigation water for his family’s farm.

Kamkwamba’s socio-economic environment in Malawi is hardly unique. According to nonprofit organization The Hunger Project, 842 million people–or one in eight people in the world–do not have enough to eat. 1.7 billion people lack access to clean water. 75% of the world’s poorest people–that’s 1.4 billion women, children, and men–live in rural areas and depend on agriculture and related activities for their livelihood. And the International Energy Agency and the World Bank notes that 1.2 billion people around the world are still stuck in the dark.

While he was forced to leave formal schooling, he had access to a small library from which he was able to teach himself. He then used that knowledge to build tools that would allow him to access such basic necessities as water and electricity for his family, thereby turning around his, his family’s, and even some local villagers’ futures.

Kamkwamba’s story teaches us that only by thinking about innovating to solve problems of access can we begin to truly tackle these socio-economic issues.

Overcoming adversity through innovating is a process that begins with mental toughness, cultivating one’s curiosity, and doing what others aren’t doing.

The first step in becoming innovative is accepting that the world around us needs to change, sometimes because of unexpected and unprecedented events, and believing that we as individuals must take initiative to make that change happen. It requires ongoing learning and an open mind with a willingness to see the world in new ways. Upon such realization, one must develop an unshakable mental toughness for the long haul. As Kamkwamba said during his 2009 TED talk, “How I Harnessed The Wind”:

Trust yourself and believe; whatever happens, don’t give up!

Changing the way we live or do business requires imagination and creativity. And that requires staying curious about the world. The less we’re wrapped up in our current situation or thinking, the more we notice about the world. Even Einstein famously declared that he had “no special talent beyond being passionately curious,” which means there is no better avenue to cultivate creative work aside from impassioned curiosity.

DO WHAT OTHERS DON’T

Taking unconventional paths requires taking risks for a greater reward (financial or otherwise). It takes courage to act differently than others might. Innovative people tend not to dwell on things, but are decisive—the unknown does not paralyze them. They invest in their own capabilities and plow forward to create access where there is none. This brings us back to the need for mental toughness, because many times those risks don’t pay off right away.

Connecting the dots between the access one already has and the access one needs, coupled with the traits described above, allows us to survive and thrive.

Watch Kamkwamba’s TED talk from 2009 below for more on what he accomplished:

Not Every Lesson In Life Can Be Learned — Some Have To Be Lived.

How To Create A Culture of Innovation