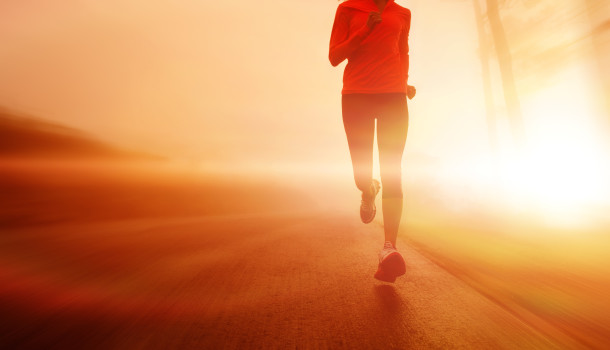 Success often has much more to do with perseverance than it does with a person’s innate qualities.

When Muhammad Ali was asked if he liked training, he replied: “I hated every minute of training, but I said to myself, ‘Don’t quit, suffer now, and live the rest of your life as a champion.’” Ali prepared for his fights by pushing himself, no matter how much it hurt. That’s what every tough-minded person does when they’re trying to achieve something difficult. They power through the obstacles, and they don’t give up. 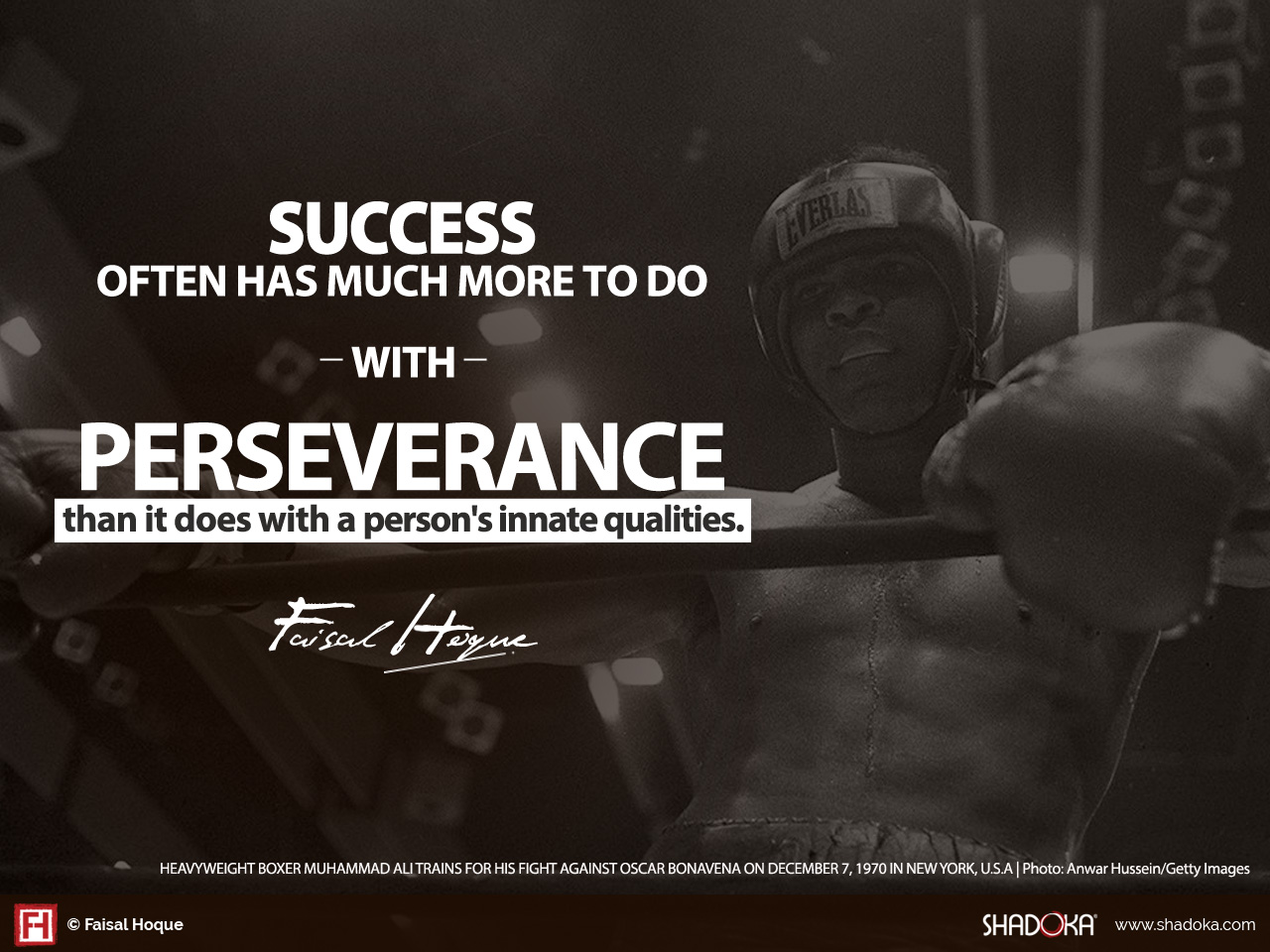 Success often has much more to do with perseverance than it does with a person’s innate qualities. That isn’t to say talent doesn’t matter, just that it only goes so far without sacrifice and effort.

In his book The Boys In The Boat, author Daniel James Brown recounts the story of nine scrappy, working-class Seattle men who won gold at the 1936 Olympics for rowing. Reflecting on the effort it took to be part of world-class crew team, Brown quotes the boat-builder George Yeoman Pocock:

“It is hard to make that boat go as fast as you want to. The enemy, of course, is resistance of the water, as you have to displace the amount of water equal to the weight of the men and equipment, but that very water is what supports you and that very enemy is your friend. So is life: the very problems you must overcome also support you and make you stronger in overcoming them.”

Ali and the 1936 U.S. rowing team were hardly alone—and their experience doesn’t just hold sway in sports. History is littered with people who failed repeatedly before finally succeeding. Even Theodore Geisel (Dr. Seuss) had his most famous book, The Cat In The Hat, rejected 27 times before a publisher finally took a chance on him. Now, more than 600 million copies of his books are in print and widely adored.

If you set out on your own without a safety net and try to achieve something great, you’ll need to be ready to persevere.

HOW GOOD WILL HUNTING (FINALLY) GOT MADE

When I was in college, I had a particular affinity with the 1997 blockbuster Good Will Hunting. That’s because, like the title character played by Matt Damon, I had a job as a graveyard-shift janitor.

The movie follows a group of friends from South Boston scraping their way through life. One of them, Will Hunting, is a genius—a guy who impresses MIT faculty, humiliates Harvard grad students, and turns down job offers from the National Security Agency. While the film is about how brilliant minds work outside traditional systems and institutions, the story of how it got made offers a similar lesson in outsider success—and how difficult it is to achieve.

Damon had started the script for a playwriting class he was taking at Harvard in 1993 and later sought Ben Affleck’s collaboration. At the time, both were Cambridge, MA, natives who were struggling actors in L.A. One of their main goals in working on Good Will Hunting together was to give themselves prominent acting roles. “We never cared about money—we wanted to be in the movie. That was our only thing. That was our big ask,” Matt Damon later told Boston magazine.

After their agent shopped the script to every studio in town, they found themselves in the unlikely position of being locked in a bidding war before landing their first-choice studio, the film giant Castle Rock Entertainment. But a short time later Damon and Affleck began butting heads with the studio over who would direct the movie. They were told to either find a different studio to buy the rights or lose the chance to act in it altogether.

Walking away from their vision simply wasn’t an option. They went back to studios that had previously shown interest only to realize they’d both become pariahs. Production companies that earlier had fought tooth and nail for the script now only met with them to tell them they could forget about ever getting a deal.

When Miramax finally came through with an offer, it felt to them like a miracle. Still, for the next four years Damon and Affleck continued to sweat it out as the project repeatedly stalled—ultimately reaching an agreement on a director (Gus Van Sant, a relative unknown at the time), confronting script rewrites, casting issues, and the range of other delays typical of Hollywood productions.

It was landing the late, A-list comedian Robin Williams in 1997 in a co-starring role that clinched the deal for the movie to be made.

Upon its release in 1998, Good Will Hunting became a sleeper hit and garnered nine Oscar nominations, grossing $226 million worldwide. Williams won the Oscar for Best Supporting Actor, and Affleck and Damon won Oscars for Best Original Screenplay. The young Cambridge natives’ careers were made: The Bourne franchise, Ocean’s Eleven, Argo—all those later career achievements were built on the original success that took so much effort to pull off.

Damon and Affleck believed in the dream they had, and despite so many obstacles they stayed true to the passion that first drove them. Damon later recounted:

“The very first day, I remember we started crying, because it was a scene between Robin [Williams] and Stellan [Skarsgård]. And when Gus [Van Sant] called action and we watched these guys—I mean, accomplished actors—do our scene verbatim, we had waited so long for this to happen. I remember just sitting next to Ben, and I had tears rolling down my cheeks because I was just so happy and relieved that it was really happening.”

Success never comes easy. But no matter what happens, it’s our duty to stay connected to our core intentions. That’s what Affleck and Damon did.

Barriers and setbacks should be seen as challenges or opportunities for growth and development. Failure—and the way we respond to it—is an important aspect of life’s journey. It creates innumerable chances to rethink our next steps, potentially leading to something greater than we first imagined. 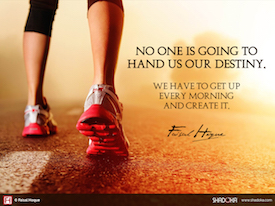 Our greatest accomplishments seldom have to do with simply who we are. It’s much more about what we overcome, and how. No one is going to hand us our destiny. We have to get up every morning and create it.

The One Thing Entrepreneurial People Never Do 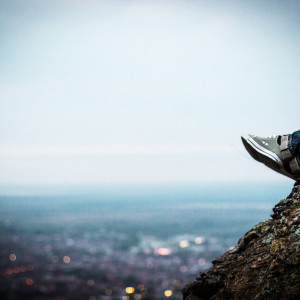 Entrepreneurs are praised for their triumphs, but what about their struggles and the journeys that brought them to success? BY @EO. In...
©2020 Faisal Hoque. Privacy Policy | Terms of Use
Back to top
Main menu